This is the bottom.
The boots were so heavy that Dali could hardly lift his feet and he had to be bundled onto the stage with the support of his stumbling assistants. Once there he stood motionless in the full deep-sea diver suit holding two white Russian wolfhounds on a leash. Then he tried to begin his lecture on Fantomes paranoiaques authentiques or, since he was in London, authentic paranoid fantasies.

When the eccentric Lord Berners had hired the suit for the show, he had been asked to what depth exactly the artist was intending to sink. The reply, of course, was that Dali intended to descend to the level of the subconscious. As it turned out, no one had thought to include breathing apparatus with the suit and it was only when the great man started to deliver himself of his thoughts on paranoia that he realised no one would be able to hear him from behind the glass porthole of his helmet. Not only that, but he was beginning to suffocate. Luckily, swift action from Surrealist patron Edward James and a hammer saved Dali from a descent into the unconscious. 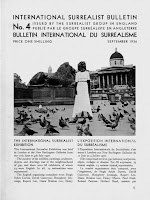 The audience that day in June 1936, unaware that the artist was in real danger of expiring before them, had accompanied the wild thrashings around of Dali and his rescuer with sustained, enthusiastic applause. For them it was all just the kind of exciting unexpected thing that these new artists were getting up to. They had already seen in the halls of the New Burlington Gallery the works of Dali, Miro, Rene Magritte and Max Ernst among others in the first major UK exhibition of Surrealist art. In their thousands, they had marvelled at noses growing into pipes, clocks melting and fur-lined tea cups.
For the man in the street, the man on the Clapham omnibus and most of John Bull’s readers, though, good art was art that cleverly reproduced the appearance of recognisable things. The comment of a reporter on the Sheffield Independent who had been despatched to the London show summed up this attitude. Praising the technique of the artists, he went on to say with some regret that most of them could “obviously do ‘straight’” if they put their minds to it. In fact, he was only getting the satisfaction of technical virtuosity because of the realism that had to be there before it could be subverted to become surreal. What he would have thought of later developments like colour field painting or performance art can be only be guessed. 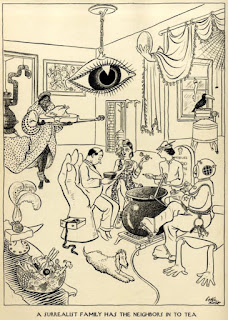 The reaction of a large part of the general British public to modern art has always been marked by contempt and/or derision, fuelled by a deep suspicion of all things intellectual. There’s a feeling that someone is trying to pull the wool over our eyes, usually for personal advancement and money. More often than not, this antipathy is manifested as humour. Tony Hancock's rebel was the best of many comic portrayals of the modern artist and, over the years, a whole genre of newspaper cartoons has developed with the pretensions of modern art as its target.

The mockery in this Bullet revolves around one of the most often expressed put-downs of modern art. Given the technical competence of the Surrealist painters, the old ‘my 5-year old could have done that’ won’t wash. So the next most obvious deviation from notions of good art is that it is impossible to tell what is going on in the picture, so most normal people would have no idea which way up it should go.

This is the top.

Did Dad like art?
What art did Dad like?
What pictures did we have on the walls at Christchurch Street (1940s-1970s)
Were your artistic achievements and aspirations celebrated and encouraged?