This nifty pun is one of the more immediate Bullets, because I can imagine that wherever in Christchurch Street Dad was pondering his solution, a coal fire would have been in his line of sight. They were laid every morning in winter by Mum shunking out the clinker and improvising kindling with pages of the Daily Mirror twisted into loops that looked like boy scout neckerchiefs.
Central heating was unknown in the Victorian terraces that housed the working classes across the country during the 1940s and 50s, only really becoming common during the 1970s. With no such thing as double glazing either, the cold air would insinuate itself through every misaligned sash or door frame. No wonder so many thought of emigrating.
In the immediate post-war era, it would have been a very easy thing to do.  With a crippled economy and decimated housing supply at home, the British government established a scheme in 1947 offering British citizens a passage to Australia for £10, instead of the nearly £120 the trip would normally cost. Incredibly, the scheme officially ran until 1982 and over that time more than 1.5 million people took advantage of it. Not all of these emigrations were successful, though, and a large number returned to Britain after spending the 2-year minimum in Australia that was a stipulation of the deal.


For the Australian government, the Ten Pound Poms answered a problem that had been encapsulated by the Bullet-like slogan “populate or perish”. In the late 1940s, what this really meant was ‘populate with white Europeans, otherwise we will be swamped by less desirable sorts’ - or as immigration minister Arthur Calwell put it "We have 25 years at most to populate this country before the yellow races are down on us."
Various pieces of legislation dating back to the Federation of Australia in 1901 had sought to limit entry into the country. Collectively these acts became known as the White Australia Policy. Attitudes liberalised in the decades after the war, with the crucial blow to the policy being struck by Harold Holt’s Migration Act of 1966, which gave access to non-European immigrants, including refugees fleeing the Vietnam War.
While the first of the Ten Pound Poms were embarking on their new adventures, in the year before this Bullet was written, a ship left Australia bound for Britain via the Caribbean. When it called at Kingston Jamaica, the SS Empire Windrush took on board 492 passengers who had paid around £28 for the journey as well as several stowaways. On 22 June1948, she docked at Tilbury and, just as the Ten Pound Poms were discovering sunshine and wide-open spaces, so the Windrush Generation were about to come up against grey skies and draughty houses. 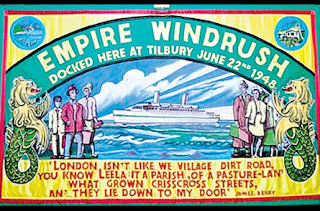 Did anyone else ever see mice run out of the grate some mornings when the fire was being set?
Did Mum and Dad ever consider emigrating?
Did anyone in our family know anyone (e.g. a school friend) who became a Ten Pound Pom?
Posted by Ian Cowmeadow at 06:07