Over the last 40 years or so, fags have gone from harmless comfort and sophisticated accessory to outright poison. Chat show hosts no longer routinely light up to give their guests a sense of ease, a visit to pub or cinema doesn’t impregnate our clothes with the odour of ashtrays and there may even be a decline in kids hunkering behind the bike sheds to share a crumpled JPS. Rugged lung-filling has been replaced with the effete sipping of the vapeurs. It is amazing how quickly one of life’s everyday details is becoming an anachronism.

This Bullet’s reference to the scarcity of cigarettes is an indication of their luxury status in the immediate post-war period. Not being essential, tobacco was not rationed. Ironically, this made it harder to get, the rationing of essentials being based on supply levels that were limited but guaranteed. 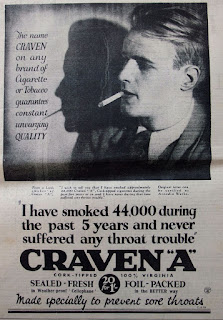 In the 1940s and 50s, smoking was still promoted as essentially healthful. But while people generally may not have been aware of the disastrous long-term effects of the habit, there was plenty of comment on the more superficial symptoms. This Bullet plays on the dual meaning of “puffing” as the act of drawing on a cigarette, and the shortness of breath caused by over-indulgence.

That acknowledgement of the unpleasant side effects of the enjoyment of tobacco was echoed in some of the advertising. The example here comes from a 1933 copy of John Bull, and its boast that Craven A cigarettes are made to prevent sore throats is only a backhanded way of admitting that smoking any other tobacco causes them. That same copy of the magazine also contains Bullets competition No. 921 with a first prize of £500 plus 100 cigarettes per month for life; an award that may well have turned out to be spectacularly self-limiting.

How much and for how long did Dad smoke?
What did he smoke?
How many of the Rabble smoked?
What did Mum think of smoking?
And any other smoking related titbits.