A large number of the lead-in lines supplied to competitors by John Bull related to British and world affairs of the time. Sometimes, the theme was specifically indicated – Russia crops up regularly in the late 40s and early 50s, for example – and sometimes the approach is more general, as in this case. In theory, competitors could have turned “Ship of State” into a comment on domestic life, perhaps comparing the steady running of a household with weighty affairs of government, and maybe some did. Bill, though, went for an issue-of-the-day approach.

The Amethyst was a Royal Navy ship, and it was attacked by communists. In the spring of 1949, she was chugging along the Yangtse River on her way to relieve HMS Consort, parked up at Nanking ready to evacuate British embassy staff as the Chinese Civil War headed into the final months of conflict. The British thought they had an agreement with the Chinese government that allowed Royal Navy vessels to potter about on the local rivers protecting the UK’s interests. The communists under Mao Tse-Tung, who had positions all along one bank of the Yangtse, thought otherwise and duly opened fire on the Amethyst. The captain was killed and the wheelhouse destroyed so that the ship lost control and ran aground on a mud bank in the river.

Unable to return fire because the power room had also been hit, paralyzing the gun turrets, the crew tried to ferry injured sailors to the bank. But these too came under fire until more than 20 of the Amethyst sailors were dead. The British response was to order Consort and another vessel to attempt a rescue of the stricken ship, but both were beaten back by heavy fire from the river bank, which inflicted further losses. The communists let it be known that they would not allow the ship to move until Britain withdrew all of her armed forces from China. 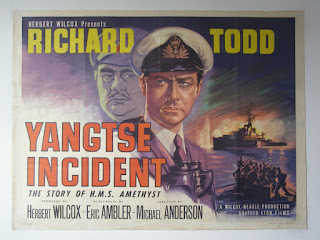 Eventually, the Amethyst got free of the mud bank under cover of darkness and prepared to move off down the river, its insignia covered with dark cloths. As luck – for the Amethyst – would have it, another boat called the Kiang-Lin Liberation, carrying refugees back to Shanghai, passed as she was about to get going. Using the lights of the other ship, Amethyst was able to navigate along the river from some distance behind. But the communists spotted what was happening and opened fire once more. In the barrage, the refugee ship was sunk with heavy loss of life and the Amethyst made it, battered and limping, to safety. 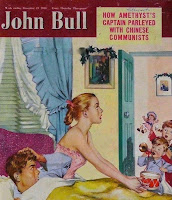 The Yangtse Incident, as it was known, was murky enough to generate differing accounts of what really happened and accusations of cover-up from both sides. But one of the first publications to get direct accounts from those involved was John Bull, which sent the Canadian journalist Lawrence Earl to interview any crew members who would be prepared to talk on the ship's return to the UK late in 1949. Earl eventually published a book on the incident from this material and his work was serialised in John Bull in 1950, after this Bullet had been written. 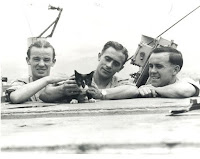 For public consumption, the story played out as a Boy’s Own tale of a daring escape from a despicable foreign enemy who certainly wasn’t playing cricket. An enemy so dastardly that they even injured the ship's cat Simon, who simply took no notice and carried on keeping the rats out of the galley even as shells burst around him, earning the animal equivalent of the Victoria Cross for his efforts. As if that were not enough, this was  an enemy fired up by a fanatical ideology that, by 1949, was considered no less menacing than the one that had been sent packing only four years before. 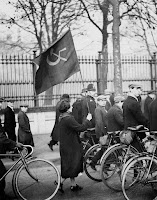 In Britain there were people who were happy to call themselves communists and the Communist Party of Great Britain (CPGB) even had two members of Parliament. The party had been set up in 1920 following the Third International's pronouncement that communist parties should be established around the world. They played a major role in blocking Oswald Mosley's Blackshirts before the war, and found themselves having to flip from opposition to the conflict following Stalin's pact with Hitler to energetic support for the Allied cause after the German invasion of Russia. During that time communism and the Soviets became a source of friendly fascination for the British and membership of the party peaked at 60,000.

Once Hitler had been dealt with and as the Iron Curtain began to fall, it was a different story. Although disparate groups of fascist sympathisers were springing up as people interned during the war were released, eventually coalescing as the Union Movement with Mosley at its head, it was the communists who were seen as the real threat to the country. In the General Election of 1950, both communists lost their seats, the CPGB began what would prove to be a terminal decline and the Ship of State sailed on untroubled by the red menace. 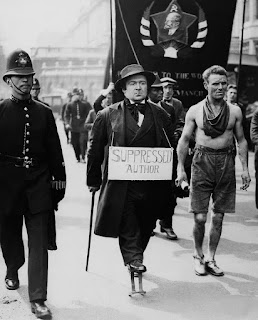 Dad's Bullet here has a lot to do with pleasing the John Bull editorial line. I'm pretty sure he wasn't a communist and also pretty sure he was a Labour man - but what were Dad's politics as far as you recall?