Bullets 1658 (1948)
WHEN DAD PLAYED SANTA
Tiptoed upstairs expertly!
Perhaps it’s a wicked deception perpetuated down the generations that has left whole populations traumatised with the memory of how their own parents lied to them. Or it’s a marvellous story of kindliness; a shining example of the power of fantasy and imagination to bring a little magic into a cold world. But whether he’s an irresponsible con or a great white lie, we all come to realise sooner or later that Father Christmas is not real.

In a classic example of us adults inflicting our own childhood traumas onto our unsuspecting children, we go to remarkable lengths to keep the fraud alive. Egged on by commercial interests, we drag the little ones to grottoes haunted by resting actors in detachable beards, who hand out pound shop toys with jaded jollity. Unless, of course, we are lucky enough to stumble on a quality performance from an alumnus of the Ministry of Fun’s Santa School which has been offered every year since at least 2005. There’ll be no half-hearted Ho Ho Ho from this skilled technician, and he’ll have the professionalism to know that he shouldn’t ask what the little treasure wants for Christmas (because he already has their letter about that). 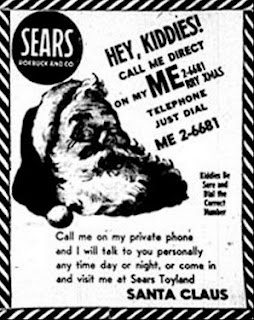 Even the might of the US security services has been co-opted into the fib. In 1955 a misprinted telephone number in a Sears and Roebuck Christmas ad led to children calling what they thought was a Santa hotline. In reality, they were getting through to an organisation known as the Continental Air Defense Command or CONAD which had a mission in those Cold War days to track the movements of Soviet aircraft. In a festive mood, the staff there decided to play along, and they gave their young callers what they said was updated information on Santa's progress from the North Pole to their town. As is the way with the military, CONAD morphed into a different acronym - NORAD or The North American Aerospace Defense Command - who continue to provide a Santa tracking service to this day.

But forming the bedrock of great gestures such as these in the cause of the great myth are the efforts of Fathers (and I suppose mothers) in millions of homes who leave half-eaten carrots, dregs of whisky and sometimes snowy footprints for the amazement of their credulous offspring on Christmas morning. Even when the spell is broken as teenagerhood looms, the evidence of Santa and Rudolph's visit is still left by the tree or the fireplace. It might be met with a shrug and a 'meh' by the gangly child, but they'll learn when they turn adult that this is a story you can never really let go.

Happy Christmas to all the Rabble and their offsprings

Did Dad do Santa?
Did you ever catch him at it?
Did they do the extras - like the carrot with a bite out?
When did you find out the awful truth?
Posted by Ian Cowmeadow at 03:26