This is one of many efforts from the late 40s and early 50s that are coloured by events of the day. Just two years after Hiroshima, in 1947, the site of a former arms factory at Sellafield in Cumbria was renamed Windscale and cleared to make way for a new atomic energy site. A year later, the first large reactor outside the US was commissioned and BEPO (British Experimental Pile ‘0’) was born. Although it took until 1956 for the world’s first nuclear power station to open at Calder Hall in Northumbria, the idea of a zippy new future powered by the atom was gaining credibility by the time this Bullet was written.
The twist in this one, though, is that while it nods to this bright new world, it tuts like a curmudgeon at the corrupting effects of the latest technology on the feckless Human race, which loves nothing more than finding novel ways to waste time. One of these ways was the wireless, whose rise had been almost as rapid as that of nuclear power so that, by 1949, more than 9 million radios were licensed to British households. 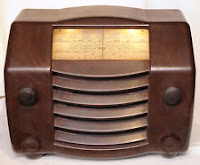 The invasion of those polished cabinets, with their elegant knobs and dials into the post-war living rooms of the nation had its roots not just in the development of valves and speakers for amplifying and revealing radio signals, but also in the notion of radio broadcasting as entertainment. In the early days of radio transmission, authorities kept strict control over the use of frequencies - in the UK, through the office of the Postmaster General. The technology was regarded as a utilitarian form of communication that was becoming central to shipping and, increasingly, aircraft operations.
But in 1920, the Marconi Company caused a sensation by broadcasting from its Chelmsford works the shrill, quavering tones of Dame Nellie Melba belting out a 30-minute programme of songs. The broadcast was heard as far away as Madrid, The Hague, Berlin and Paris, where it was captured on a shellac disc. Its imagination fired, the public clamoured for more and, despite the opposition of the authorities and those who felt that the gift of radio waves should not be used for trivial purposes, permits were reluctantly granted for regular broadcasts.

The early stations were run by Marconi from Chelmsford and London and their output consisted of music, banter and amusing poetry.  These efforts laid the groundwork for what would later become one element of the BBC’s characteristic style. The other classic BBC ingredient came from the compromises reached with authorities for whom the primary use for radio was the dissemination of information, such as shipping forecasts and kings’ speeches.

I’m pretty sure Dad did not really believe that radio would make us a nation of couch potatoes, but he couldn’t resist the ‘Activity’ pun for his entry. Maybe in 1949 he enjoyed listening to Tommy Handley gadding about in ITMA or Ted Ray’s domestic comedy Ray’s a Laugh on the BBC light programme. Perhaps he was as astounded as the rest of the country when astronomer Fred Hoyle explained the origins of our planet by coining the phrase 'the Big Bang' on BBC’s Third Programme, or it could be he enjoyed tapping his feet along to the Billy Cotton Band Show.
And just as with iPhones and tablets, people must have learned to multitask rather than slumping into inertia as the radio anaesthetised them. In fact, washing dishes, putting up shelves, even working out ideas for your Bullets, can all be done while the radio burbles away in the background. A hundred years hence, we can have our radio and our activity. 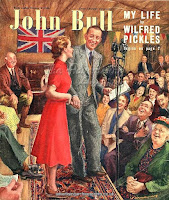 Family Corner:
* Did Dad enjoy the radio?
* What programmes did he like?
* Can you remember what radios we had? (I seem to remember a wooden thing that seemed quite big to me, with a complicated scale of stations.)
* Did you get your own radios when transistors came in?
* Were you allowed to play pop music in the house? (I’m moving forward in time here, to the 60s.)
Posted by Ian Cowmeadow at 01:39